What You Give, You Will Receive In Return

During this last year, a gentleman I became friends with lost his father. It was this loss that turned us into friends and taught me how showing compassion for someone else will be returned to you when you really need it.

Most of the conversations were your typical social chats, but we did start to get to know each other a bit. What I remember the most about this father and son was how devoted this son was to his father and how much he genuinely cared for his dad. I also remember how painful it became for Frank when his dad started to show obvious signs of dementia and his overall health started to fail.

I didn’t see Frank for a while until one day, he showed up at my front door. He visited me to tell me that his father had passed away just a few days ago and he wanted to let me know this. I invited Frank inside and we talked for a while. Frank was very sad and openly wept as he told me how his father passed.
I felt very sad for Frank as I saw how much pain he was in. As I had gotten to know Frank fairly well, I told him that if he ever needed to talk he should either just come to my home or call me and we could go for a walk in the park. 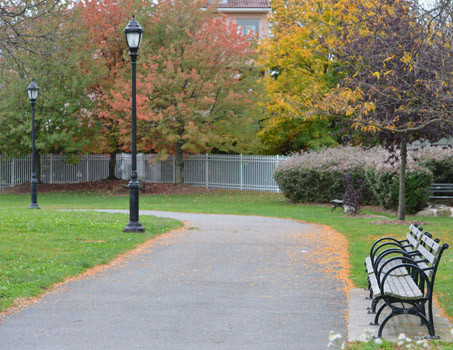 Seaside Nature Wildlife Park in Great Kills Staten Island[/caption]Frank visited my home a few more times over the next few weeks and asked if he could talk. I was happy that he decided to take advantage of my offer. Each time he visited me, he told me how much he missed his dad, told me stories about his dad, and did a lot of crying. Frank is a fairly big guy with a pretty tough exterior, but this loss was hitting him hard.
One day, I suggested that we walk in the park. This was the beginning of what would become a ritual that took place for more than a year. With each walk, Frank confessed how much he missed his dad and how heartbroken he was. In the first few months of these walks, ne could barely walk very far without breaking down and crying. He was always apologetic for crying. In return, I kept telling him “it’s OK, you don’t need to apologize”.

It took many months and many walks in the park, but life went on and Frank started to come to terms with is dad’s passing. All during this time, Frank would tell me how grateful he was to me for being there for him and listening.

Within the last few months, I personally ran into some issues that had a very negative impact on my life. I started to become very depressed and was in need of some help. I reached out to an old friend who I thought would have been very happy to lend some compassionate support to me. Unfortunately, it appears that this old friend was going through some of his own issues and really didn’t want to be bothered with my issues.

Frank noticed that I was becoming withdrawn and wearing my unhappiness openly. He asked me what was going on and I spoke openly about the challenges I was facing. Something magical happened at that point. After showing compassion and kindness to this person who was really still somewhat of a stranger to me, the tables had turned. Every day or two, Frank would either text or call me just to see how I was doing. He was now showing compassion and kindness to me. I was absolutely floored by the support that Frank started to show to me.

I learned several lessons from my time with Frank. And of all the lessons that I learned, possibly the greatest lesson was that the compassion that you show to others does come back to you.

As we go through our daily routines, when you see someone that appears “down”, simply ask “how are you doing”. This seemingly insignificant gesture can start a dialog in which you find out that this person may be in need of some support and compassion. Listen attentively to what they have to say and offer them as much support and compassion as you are able to. Your efforts will make a difference and may be exactly what someone needs during their difficult times. Then, when you need someone to lend you their compassion, the compassion that you have given to others will come back to you.

If you enjoyed reading this, please be sure to tell people about The Compassion Center. All comments are welcome.