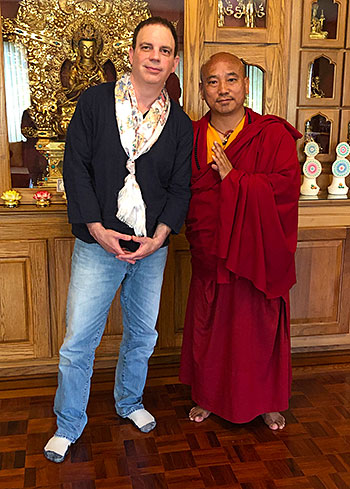 I started a journey about 10 years ago that culminated with a very special event. On June 17th, I took my refuge vows. For many people, this means becoming a Buddhist. For me, there was a much deeper meaning as explained by the monk, Khenpo Karma Tenkyong, who gave me the vows. I was making a commitment to helping all people who are suffering. I made this formal commitment and now have a stronger and clearer focus for the rest of my life.

Taking refuge comes at an interesting time in my life. Almost ten years ago, I made a commitment to stop consuming alcohol. My love affair with alcohol lasted almost 30 years. Now, as I come close to my 10th anniversary of living a sober life, I have not had a drop of alcohol and can sincerely say that I don’t miss it and I know that I am a far better person today than I was before.

My company, The Compassion Center, is now almost 5 years old. It started out as a vehicle that my partner, and original teacher, Ven. Thupten Phuntsok, and I were going to use to offer Meditation classes to the people of Staten Island, train some of them to become Meditation teachers, and then focus on corporations in NYC, seeking Meditation classes as well as people living on Staten Island who were seeking help.

The Compassion Center started with great promise. But a few months after opening, Puntsok became very ill. To temporarily replace Puntsok, Puntsok recommended two Meditation teachers. Unfortunately, these teachers were not a good fit with the Staten Island audience. This forced me to do what I had been doing for a while but did not feel comfortable enough to take the lead. I became the lead Meditation teacher of The Compassion Center.

When I closed the 4116 Hylan Blvd. original location of The Compassion Center, I started to invite meditators to my home to practice. What started out as a garage that that doubled as a Meditation space, ultimately became the new home location of The Compassion Center. People still find it hard to believe that the picture you see here is in fact my garage. People are absolutely amazed when they first step into the space. They find it very peaceful, calming, even spiritual.

I have now been teaching for almost 8 years with most of my classes being taught during the last 4 years at The Compassion Center’s 2 locations, in corporations throughout NYC, and at people’s homes on Staten Island and in other parts of NYC. I have now taught somewhere in excess of 1,000 classes and taught thousands of people how to meditate.

Almost 3 years ago, I realized that only a small percentage of people on Staten Island were really interested in Meditation. However, I also realized that the majority of Staten Island was suffering. When people called for private Meditation classes, almost 100% of these calls was because of anxiety. The rate of anxiety on Staten Island, and in NYC, is off the charts. And there were always 2 types of people calling me. There were those who were on anti-anxiety Meditation for years, and those who had seen a professional and were told that they should be on anti-anxiety medication.

The ones who were on medication desperately wanted to get off the medication. The ones that were told they should take anti-anxiety medication did not want to do so and were seeking an alternative method to deal with their anxiety. As I knew that Meditation was a very effective method to reduce and eliminate anxiety, I changed how I marketed and advertised The Compassion Center and started to focus on helping people through teaching Meditation.

This change in focus was a perfect fit for what I now know is my true nature. I had a tool to help people to be free of their pain. And I was very comfortable teaching people how to meditate and how to make changes that would ease their pain and suffering. The name of my company, The Compassion Center, made more sense than ever. 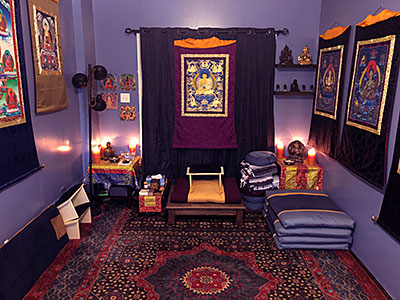 During the last 4 years, I found myself becoming increasingly attracted to Buddhism. I started to read much more on Buddhism than I had done before. I started to seek out centers and attend their pujas and classes. In looking at Buddhist art, I found myself attracted to Thankas (hand-painted depictions of Buddhist imagery) and started to buy several of them with the main Buddhist deities depicted. I also purchased a few statues. You can see many of these in the picture above.

I remember one of my original students (Yuda) coming to The Compassion Center, seeing all of the thankas and statues and saying ‘what’s going on Dan’. Yes, there was a big change going on. I had a certain familiarity with the images and the changes going on.

My original teacher Puntsok came to The Compassion Center to teach a series of classes on Buddhism. One student asked at one point, “Dan, you’re Buddhist, aren’t you?” After thinking about the question, and looking at my teacher, I responded “I am Buddhist in the way I live my life. But I have not taken my vows yet to become a Buddhist.” After the class, Puntsok commended me on my answer and said that I was more Buddhist than many Buddhists he knows.

Even though I had thought about taking my refuge vows, which would have formalized the process of “becoming a Buddhist”, I was reluctant to do so as I felt I was not in a rush. I wanted to make sure that my motivation was correct and that other elements in my life were just a certain way. And during the last 6 months, my desire to take refuge started to increase. This happened with my decision to visit the Karma Tryiana Dharmachakra Buddhist monastery in Woodstock, NY.

I visited KTD almost every month for the last 6 months to mostly attend their once a month full-moon Chenrezig puja. This is one hour of saying prayers and mantras in Tibetan and English led by an ordained Tibetan Buddhist monk. I always felt at peace after each of these classes. And, very importantly, with all the suffering that I was exposed to, via the people that came to my classes, attending these pujas was a way to “refill my cup” so that I could help more people without feeling overwhelmed.

There was a special event at KTD referred to as a “Mani Retreat” which I attended. Khenpo Karma Tenkyong was going to lead the retreat. So I reached out to him and asked if he would consider giving me the refuge vows. He agreed to do this. But on the last day of the retreat, I felt exhausted and just wanted to go home. Much to my surprise, when I arrived home, I had a message from Khenpo Karma Tenkyong asking what happened that I did not take my vows. He understood and invited me to take them when I next visited.

I decided to return to KTD for a June 17th full-moon Chenrezig puja. I contacted “Khenpo Ten (10)”, as he likes to be called, and asked if he could give me the vows on that date. He was happy to do so and told me to meet him before the puja. Little did I know the significance of all the events that were taking place. 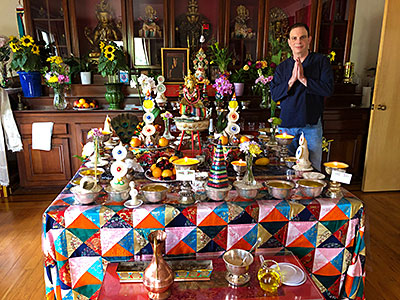 June 17th was a very auspicious date for Buddhists. It was Saka Dawa, the holiest day for Tibetan Buddhists. It celebrates the birth, enlightenment, and death of Buddha. It was also a full-moon. Even though I knew Saka Dawa was sometime around this date, I did not know that this year, it fell on June 17th. When I visited the Green Tara shrine room, before the refuge vows, I did a meditation in the room. The room had an incredible spread of food and decorations which were done in honor of Saka Dawa. This is a picture of me in the Green Tara shrine room with all the decorations.

The ceremony lasted about one hour. Most of it was spent with Khenpo 10 teaching me how I should live my life from that moment on. It was clear that he knew about The Compassion Center and what I was doing. One of the strongest statements he made to me was that I was taking these vows to make a commitment to helping people to be free of their pain and suffering. This is something I had already been doing via The Compassion Center. But now, I made a formal commitment to do this.

I was given a Dharma name in the ceremony. It is “Karma Nyingje Dorjee”. The approximate translation is “The force of compassion with a thunderbolt”. It is a very appropriate name as my company name, and mission, have been based upon compassion. For me, the thunderbolt symbolizes a commitment and how I have always approached things that I was passionate about. I see what I want to do and head straight for it without any possible thought of failure.

Has taking the refuge vows changed me? I think I am still the same person that I have been with possibly one exception. I understand my purpose in life and have made a commitment to it. Where some people have thanked me and paid me beautiful compliments on my commitment to help others, it is as natural for me to help another sentient being as it is to wake up each day. It’s not an obligation. It is a blessing and something that brings me great joy and happiness.

With much love and compassion,
Karma Nyinje Dorjee (aka. I’m still just Dan)

Meditation Classes in Woodstock New York, Learn How to Change Your Life
February 27, 2020
Go to Top