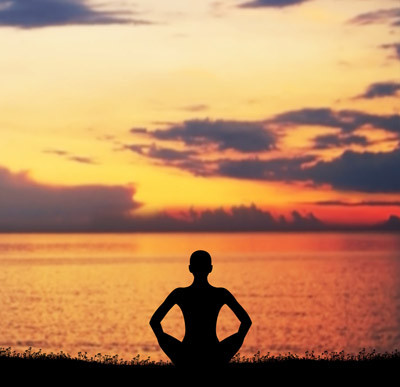 When I was 7 years old, I was first introduced to Meditation. While I was attending a day camp, one of the councilors asked me to come to his Yoga class. Years ago, most Americans didn’t know what Yoga was and as a little boy, I had some strange idea of what a Yoga class was. So, when my councilor asked me to take his class, I responded with a ‘no way!’. My councilor pleaded with me to go to his class. He explained to me that the reason why he wanted me to come to his class was that he didn’t have any boys signed up for the class. Once it dawned on me that I was going to be the only male in an all girl’s class, I liked those odds!

So, I took my first Yoga class and at the end of the class, we did a Meditation. I really liked the class and was fascinated by Yoga. This was a time in the USA when people were just starting to learn about Yoga with the help of TV programs like Richard Hittleman’s Yoga show. It was Richard Hittleman’s TV show and his books that created the foundation for my Yoga and Meditation practice.

Over the years, I continued my Yoga practice on and off with occasional visits to Integral Yoga in Manhattan for their classes. I also continued to Meditate using the Meditation techniques that I learned from Richard Hittleman’s books, show, video and from Sri Swami Satchidananda’s books, videos and teachings at Integral Yoga. What I did not know was that there were many other types of Meditation

One morning, after waking up and feeling like I had just about the worst hangover I ever had, I decided to end my 30-year love affair with alcohol. I made the decision to live a sober life. Ironically, it was very easy for me to stop drinking. However, I realized that I never addressed why I drank the way I did and decided it was time to start addressing this.

I tried therapy on and off over those 30 years, and nothing clicked to make me want to stay sober. So, I decided to take a different approach and start searching for the reason(s) why I had spent so much time hurting myself. I made up my mind to begin a journey and part of this journey included revisiting Yoga and Meditation.

I had practiced Meditation on and off over those 30 years and I did enjoy these meditations. But I felt that there might be a lot more to Meditation than what I had learned. So, I began a search for a center and teacher that offered other styles of Meditation. My search brought me to an Intro to Meditation class that was offered by the Sri Chimnoy Institute in Manhattan. It was a good class, but I didn’t feel that this organization was right for me.

I wanted to find other places offering Meditation classes and took a chance by calling an organization I had visited several months before that. I called the Jacques Marchais Museum of Tibetan Art in Staten Island. As it turns out, they offered a Saturday morning Meditation class. That Saturday, I visited the museum and took their Meditation class.

I must admit that I was not convinced by this class that this was necessarily the best place to study Meditation, but I was interested enough in the class to return the following Saturday for a follow up.

In the first class, I was surrounded by a small group of people who had clearly attended these classes before and knew what to do. When the teacher entered the room, people stood up (a sign of respect as I later learned), the teacher sat on a Meditation cushion, the people in the class sat, they went silent, and the teacher began to give his guidance. I had no idea what to do and I had no idea what to experience. The class was OK, and most importantly, the experience was interesting enough to warrant me coming back for a second class.

I would like to make a quick comment here for those people who may be thinking about attending their first Meditation class. Unless you have a horrible first class, try not to judge your first Meditation class as well as your teacher too much. Attend a second class and then you will have a better perspective on the teacher and Meditation. To judge Meditation and a teacher only on one class is not being very fair to yourself. Not to contradict myself, I did not attend a second Sri Chimnoy class because I did not like some of the things I heard with regards to financial involvement.

The following week, I returned for my second class at the Jacques Marchais Museum of Tibetan Art. After the first 20-minute guided segment, we were invited to ask questions. I took advantage of this. The questions I asked and the answers that the monk provided helped me to gain a very basic understanding of what I was supposed to do and what I was supposed to experience.

This style of Meditation differed significantly from the Yogic style of Meditation I had learned many years earlier. In that style, most of the time, we performed the Yoga postures and then we laid on the floor, the teacher gave us some verbal guidance, and we went into the Meditative state (or what I had learned to that point was the Meditative state).

The Meditation that was (and still is) taught at the museum was a guided Meditation led by Venerable Thupten Phuntsok, an ordained Tibetan Buddhist Monk. The Meditation is routed in Tibetan Buddhism and Vipassana Meditation. The simplest way to describe the process is to say that you focus on a “motivation (i.e. the reason why you wish to meditate)”, you relax your body with the guided assistance of the teacher, you bring your mind to your breath and use the breath to quiet the mind and enter into the meditative state. Once in the meditative state, we work on the “motivation”.

Armed with this new knowledge of how to meditate using this new method, I meditated every day and started to read books by Pema Chodron, Chogyam Trungpa and others. Each Saturday, I showed up for class and asked more questions. Then, something miraculous happened.

What I had not realized up until that point in my life was that I was very angry at my parents and sibling and I was self-medicating myself because of the emotional pain that had been accumulating over the years. I am the product of two parents who had many unresolved issues. Instead of resolving these issues, their emotional and psychological pain manifested as anger. This anger was then converted into emotional, psychological and physical abuse that was directed at each other (as well as their children). I carried the scars from my upbringing throughout my life without understanding how much this was affecting me.

In one of Pema Chodron’s books, I read a chapter about “forgiveness”. Pema outlined a very simple practice for giving forgiveness to others, asking for forgiveness, and forgiving ourselves. I used this practice in my Meditation and this became my “motivation”. I ultimately used this motivation to heal my scars. This took a few months of intense Meditation, but there was a moment in one of my meditations where I felt that the weight of the world was lifted from my shoulders. I ask my teacher years later about whether it was “normal” to meet one’s motivation in such a relatively short time. He said it was highly unusual, but was certainly possible with the right dedication.

The teacher who taught me how to meditate, Venerable Thupten Phuntsok, and I became friends over time. As I got to know him, he allowed me to bring some analysis to his teachings in an effort to make his teachings easier to understand. With his support, I worked with Puntsok to make his classes more powerful and more accessible to the Western mind.

Puntsok (as he likes to be called) took me under his wing and taught me how to teach others how to Meditate. I was very fortunate in that he was open to my insights on his technique. I have worked with him and worked independently of Puntsok to create a variation of his teachings that I have taught to hundreds of people over the years.

The technique still primarily utilizes traditional Tibetan Buddhist and Vipassana Meditation techniques. And most importantly, I still emphasize creating a Motivation and directing the efforts towards achieving the Motivation.